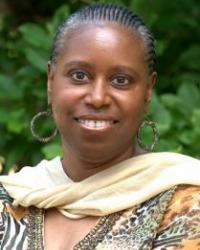 Cynthia Ann McKinney is an American politician and activist based in Georgia. As a member of the Democratic Party, she served six terms in the United States House of Representatives. She was the first black woman elected to represent Georgia in the House. She left the Democratic Party and in 2008, ran as the Presidential candidate of the Green Party of the United States.

Cynthia has remained an activist, fighting for justice in the United States and abroad. She famously helped children in Gaza during the Israeli bombing and spent time on the ground in Lybia and more recently Syria.

In February 2010, McKinney was awarded the 'Peace through Conscience' award from the Munich American Peace Committee (MAPC).

McKinney has been featured in the full-length documentary titled American Blackout. On May 1, 2004, during her hiatus from office, McKinney was awarded the fifth annual Backbone Award, "because she was willing to challenge the Bush administration and called for an investigation into 9-11 when few others dared to air their criticism and questions."