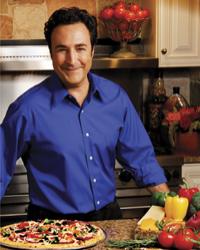 Dr. La Puma is co-founder of ChefMD and a board-certified specialist in internal medicine. He pioneered the idea of food as medicine thats tasty, including delicious eating plans for osteoarthritis pain relief, weight loss, cholesterol-lowering, anti-aging and childhood obesity.

Dr. La Puma is a best-selling author. His first general audience book became a New York Times best-seller, The RealAge Diet: Make Yourself Younger with What You Eat; his first cookbook became an Amazon 1 Cookbook, Cooking the RealAge Way: Turn Back Your Biological Clock. Both are published by HarperCollins and co-authored with Michael Roizen, MD. Dr. La Puma contributed recipes to the New York Times 1 best-seller, You: The Owners Manual.

Dr. La Puma is a popular speaker who has given over 400 lectures to professional groups and 300 lectures to educationally interested audiences as a keynote speaker. He has also been a consultant and spokesperson for companies such as CIGNA, Caremark and Kraft. He has appeared on NBC, CBS, ABC, FOX, PBS and CNN outlets. The New England Journal of Medicine, the Encyclopedia Britannica, the Wall Street Journal and the New York Times have published his work. USA Today, Prevention, Readers Digest, Parade, and Newsweek have featured his work as well. RealAge has been featured on The Oprah Winfrey Show,
Good Morning America, the Today Show and hundreds of others. Dr. La Puma is a Phi Beta Kappa graduate of the College of Creative Studies and the University of California, Santa Barbara, and graduate of the Baylor College of Medicine. He performed his residency in internal medicine at West Los Angeles Veterans Administration Medical Center and UCLA and completed the first postgraduate fellowship in general internal medicine and clinical medical ethics in the U.S. at the University of Chicago. Dr. LaPuma is the author or co-author of over 50 peer-reviewed scientific papers, 150 other contributions to the medical literature and 3 medical books, including a CME book.

Formerly a Clinical Associate Professor of Medicine at the University of Chicago and Professor of Nutrition at Kendall Colleges
School of Culinary Arts, Dr. La Puma cooked once weekly at James Beard award-winning Chef Rick Bayless Topolobampo and
Frontera Grill in Chicago for almost 4 years. Dr. La Puma also graduated from the Cooking and Hospitality Institute of Chicago
now a Cordon Bleu school in Professional Cooking, and taught the first Nutrition and Cooking Course for Medical Students in
the U.S. at SUNY.

Dr. La Puma still practices internal medicine, using the ChefMD concept to motivate his patients. Repeatedly named One of
Americas Top Physicians by the Consumers Research Council and called a Secret Weapon by the Wall Street Journal, Dr. La
Puma was honored with the National Association of Medical Communicators 2007 Award of Excellence. He is based in Santa
Barbara, California.