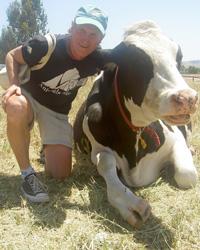 Dr. Marc Bekoff is Professor Emeritus of Ecology and Evolutionary Biology at the University of Colorado and a former Guggenheim Fellow. In 2000 he was awarded the Exemplar Award from the Animal Behavior Society for major long-term contributions to the field of animal behavior and in 2009 he was presented with the Saint Francis of Assisi Award by the Auckland New Zealand SPCA.


In 2005 Marc was presented with The Bank One Faculty Community Service Award for the work he has done with children, senior citizens, and prisoners as part of Jane Goodall's Roots & Shoots program. His websites are marcbekoff.com and, with Jane Goodall, www.ethologicalethics.org.