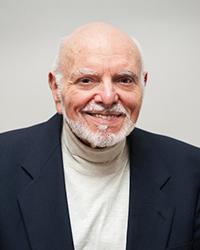 Martin Blank, Ph.D., graduated from the Bronx High School of Science and City College of New York, and received PhD's from Columbia University and Cambridge University. He is currently a Special Lecturer in the department of physiology and cellular biophysics at Columbia University, where he was Associate Professor for over forty years. During this period, he edited twelve books and published over two hundred papers on the biological effects of EMF.

He has worked for the Office of Naval Research, as well as several industrial labs, including Unilever, and is regularly asked to be an expert witness on cases involving the effects of EMF. He has also organized scientific meetings, including two World Congresses on Electricity and Magnetism in Biology and Medicine, and the Gordon Research Conference on Bioelectrochemistry.

Additionally, he has served on the editorial boards of several journals, including Electromagnetic Biology and Medicine, and edited the 2009 issue of Pathophysiology on biological effects of EMF. He was one of the organizers of the Bioinitiative Report, where he authored the section on stress proteins. He has also served as the President of the Bioelectromagnetics Society.