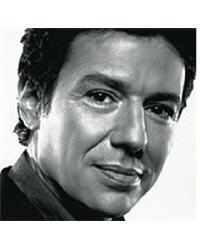 Oz Garcia, Ph.D., a highly regarded nutritional counselor and life extension specialist, is also the best selling author of The Balance and Look and Feel Fabulous Forever ReganBooks/ HarperCollins. Oz was twice voted best nutritionist by New York Magazine and is frequently consulted by some of the most respected names in medicine for his up-to-the-minute views on nutrition and its role on human health.

Dubbed the "Nutritionist to the Stars," Oz has worked with some of the highest-ranking Fortune 500 CEOs and many of film and fashion's elite A-list. Featured in publications like Vogue, Self, Elle, Travel and Leisure, W, Allure, People Magazine, New York Magazine, The New York Times, and Sports Illustrated, he has also made numerous television appearances on 20/20, 48 Hours, The View, and VH1 Rock Bodies, and a variety of news segments on ABC, NBC, CBS, and cable.

Oz is also the head of health and nutritional services for Equinox Fitness Clubs worldwide, consultant to the East Coast Alliance of Trainers where he has trained and worked with more than 10,000 trainers over the past 10 years, Nutrophy Inc, and the world renowned Life Extension Foundation.