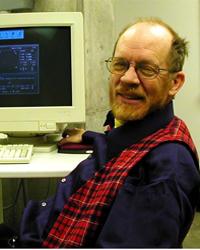 Ron Frost grew up in northern New Jersey in the 60s in an area that, at the time, was at the edge of the New York Suburbs. He decided to become a geologist because this appeared to be a good way to make a living while still enjoying the out-of-doors. Ron received his BS from the University of Virginia in 1969 and his Ph.D. from University of Washington in 1973.

His research has been on what the chemical composition of rocks, the minerals they contain, and their textures tell you about ancient geologic processes. Because of his location in Wyoming, he has studied the rocks exposed in the core of all Wyoming Mountain ranges, which include some of the oldest rocks in North America. In addition to all the work he has done in Wyoming, Ron has conducted field studies on similar rocks in Siberia, Australia, northern Canada, and Greenland. He has also participated in a ocean drilling project on the mid-Atlantic ridge, where he studied how the interaction with ocean water has affected the mineralogy of the ocean floor and have done field studies in New Caledonia, where sub-oceanic mantle has been exposed on land.

Ron's major recreation interests are skiing in the winter and canoeing in the summer. In addition to his passions of geology, boating and skiing, he has one other passion spirituality. He has been studying Shambhala Buddhism for more than 25 years. Although he has a regular meditation practice and has made many long meditation retreats, he can hardly say he has any control over his mind. It seems as busy and wild as ever. However, he has realized that there are aspects of his mind that arise from outside his ego. This realization has a major implication on how one interprets the scientific evidence for evolution. This is the major reason he wrote the book Religion versus Science, Where Both Sides go Wrong in the Great Evolution Debate.