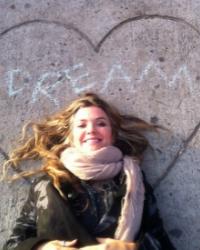 Stepping into Leadership To be a powerful leader the most important person we must have leadership over is ourselves. Some years ago Dream Rockwell had a conversation with a friend who she witnessed lose control during a simple conversation that didn't go her friend's way. Shortly after he apologized and said how horrible he felt about it. When Dream asked what was up with his outburst he said "I can't control that, I just get angry. It's beyond me." and Dream thought to herself 'If you're not controlling you, who is?'

This simple realization had never occurred to Dream before and the question opened a door in her mind to a new way of thinking. When she put this simple question to her emotional friend he stared at her completely confused and said "I don't know, not me." Dream's dear friend had excused himself from responsibility of his own emotions, believing that he had 'no control' and then she wondered... do i ever do that?

As Dream began to explore her own life she saw similar patterns that lead to her believing she was not in control of her own emotions and ultimately her own destiny. Dream realized that who she needed to be in leadership of was herself, her state. That experience has taken her down a great road of exploration into her own inner leader. Dream is the 'soul' pilot of her human 'spaceship' but she was not fully at the controls. In fact she could see how we as humans have been trained to sit outside the control room and let circumstance or other people dictate our destiny. Even the idea of The Law of Attraction and amazing movies like 'The Secret' perpetuate this myth by only giving us half the story. Dream began to wonder, what could she create if she stepped into the control room knowing fully that she was the pilot, the only pilot, and map maker of her earth life? What if she learned the intricacies of all the buttons and knobs within her? How different would her earth experience be?
Life is a journey, we are always learning and always growing and always changing.

Dream will share her story of what she's learned about flying gracefully into the next evolution of destiny.