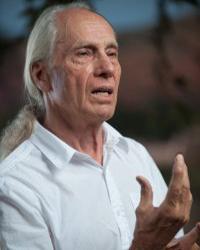 Drunvalo Melchizedek is the author of five books including The Ancient Secret of the Flower of Life, Volumes I and II, Living in the Heart, Serpent of Light and his most recent, The Mayan Ouroboros, which picks up where the Serpent of Light left off. These books have been published in 29 languages and reach out to over one hundred countries throughout the world.


He has been featured on television and the internet, and written about in magazines, newspapers and books all over the world.


He is a world traveler and has left the United States more than 280 times to help people understand their intimate connection to God.


Drunvalo is the first person in the world in modern times to mathematically and geometrically define the human light body, in ancient times known as the Mer-Ka-Ba.


He is a consultant for the international internet magazine, Spirit of Maat, www.spiritofmaat.com with over 1 million viewers each year.


He is the founder of the Flower of Life Facilitators that have been teaching his work in over 60 countries.


He has now founded his newest and complete teaching in a facility called School of Remembering with the Living in the Heart Teachers who are beginning their global work.


Drunvalo graduated from the University of California at Berkeley with a degree in fine arts. He also has a minor in physics and math with only one quarter to finish his degree.


He lives in Sedona, Arizona with his loving wife Claudette. He has six children, and four grandchildren.