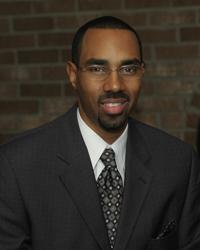 Elder Dwayne C. Merritt was born and raised in Detroit, MI. He was raised by his great grandmother until the age of 12yrs old. Shortly after graduating high school he fell into a lifestyle of running the streets chasing after a false sense of worth. In February of 2000 he found himself sitting in a police station facing 30 years for a crime he did not commit. It was by the grace of God that the charges were dropped.

It was at this point that Dwayne had time to reflect on his past and make plans for his future. He decided at that point that he would not take another step without first getting Gods permission. He has been being led by the Lord ever since that day.

He is married to his high school sweet heart Angel Merritt. They are the proud parents of twin girls by the name of Hope Madison and Faith Marie Merritt. Dwayne is a member of El-Beth-El Temple Church. He gave his life to the Lord at the age of 21 and accepted his call into the ministry in February of 2003. Currently, Dwayne serves as the Sunday School Superintendent, Pastors Adjutant, and serves on the Youth Advisory Board.

Elder Dwayne Merritt has a passion for seeing Gods people saved, Delivered and set free. Elder Merritt also has a special place in his heart for seeing the youth in Christ free and standing up for righteousness.