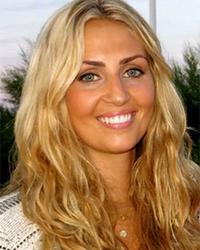 Elizabeth Nolan attended Colgate University, where she played on the women's lacrosse team, and graduated in 2010. Since then she has worked in fashion, beginning at Ralph Lauren and more recently, at Stunable, a fashion e-commerce startup she founded in mid 2011.


Her journey with Lyme Disease began when she was 7 years old. She was fortunate enough to have a mother who pushed through misdiagnosis and who was persistent about having her tested for Lyme Disease. In fact, she was the first person in her pediatrician's office to test positive but unfortunately, due to the lack of awareness, research, and frankly, comprehension of the dire nature of the disease, she wasn't treated properly. From that point on, she suffered through a myriad of symptoms, lasting for almost two decades, without the faintest understanding of the residual and mounting effects of Chronic Lyme. It wasn't until college that she began to fall gravely ill again, and after seeing dozens of specialists, including Lyme specialists, and cycling through a variation of treatments for misnomer diagnoses, she began researching and seeking out Lyme literate professionals. The medical cyripticity made access to a diagnoses unbearably difficult but this only proved to motivate her to become a more impactful self-advocate. After months of misdiagnoses, she was finally able to begin her grueling journey towards healing, never forgetting the importance of self awareness, education, and reliance along the way.

As she emerges from her treacherous battle with Lyme, she is more acutely aware of the double consciousness she possess as both a witness to the ignorance and negligence of the medical community and as survivor of a such a emotionally and physically debilitating disease. It is because of this double consciousness that she has become a proponent of advocacy, both on the individual and social level. It breaks her heart to think of all those still grappling with misdiagnoses and for those who continue to forge through treatment without any change in progress.