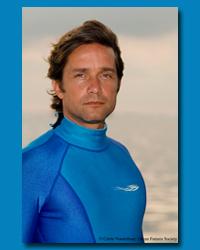 Growing up on the salt-stained decks of his famous Grandfathers ships, Calypso and Alcyone, Fabien Cousteau was destined to follow in the family footsteps of exploring and tirelessly working to protect our planets immense and endangered marine habitats.

Diving since age four, Fabien was irrevocably imprinted with an unwavering appreciation for the wonder, beauty, and importance of our aquatic ecosystems to sustaining life on this big blue planet of ours.

From his vast experience in the field, coupled with a degree in environmental economics from Boston University, he has refined a public policy platform grounded by his strong belief that environmental discipline can be the basis for innovative solutions that strike a balance between regional and global environmental problems and the realities of market economies.

Fabien set out to show what could be done in the business world. He successfully spearheaded new product development and business models for environmental sustainability. Having proven his skills in business, he returned to the deep-rooted family passion for exploration. He joined his father, Jean-Michel, and Deep Ocean Odyssey, as the third generation to carry on the tradition of adventure and exploration in the deep ocean; originally pioneered by his grandfather more than half a century ago.

Recently he co-launched Natural Entertainment, which is working on numerous projects related to exploration and environmental awareness through television and other media.

In 2006, Fabien once again partnered with his father, Jean Michel Cousteau, and sister Celine to complete a three year multi hour series for PBS called Ocean Adventures www.pbs.org/kqed/oceanadventures. Topics explored ranged from the Grey whale migration of the west coast of the Americas to the magical coral spawning of the Caribbean to diving with squadrons of goliath groupers to the ghost ships of the Great Lakes. Additional hours cover exotic places such as the Amazon, Samoa, Christmas Island, Papua New Guinea, the Arctic and many other wonders of nature. The most recent expeditions covering the topics of Belugas, Orcas and man started airing on PBS in April of 2009.

Fabien keeps his personal life similarly involved in projects like his new initiative to actively involve the public in undersea restoration initiatives coupled with government protection of the restored areas. Deeply concerned about the well-being of future generations, he is on the board of the New York Harbor School http://www.newyorkharborschool.org/ where he volunteers his time to empower youth about the water world. Being part of the Water Innovation Alliance http://www.waterinnovations.org/, Fabien brings attention about water issues to business executives in order for them to make better, more informed decisions. He also partners with outside initiatives such as Save Bimini http://www.savebimini.org in an effort to impassion people into changing the tide of current events that threaten to blindly destroy the environmental wealth of our future generations. His most recent, and perhaps most ambitious, endeavor is creating a new foundation committed to educating the public on the alarming need to restore our marine habitats. The Plant-a-Fish Initiative will spearhead public education programs as well as guiding large environmentally sensitive corporations with a genuine commitment to making the world a healthier place for mankind.

An active writer, he is currently working on a childrens book trilogy. Fabien has been seen on network television, the Oprah Winfrey Show, and as a regular guest/contributor to NBCs Today Show. Additionally, he is a sought after speaker at a variety of foreign and domestic environmental and water conferences.

Fabien shares his time between France and the United States New York City and when not conducting fieldwork he is riding the planet on a wind surfer, mountain bike or piloting a plane. His passion for vintage motorcycles sometimes takes him to the quiet of his garage where his cellphone does not work and he can dive into the zen of breathing life into these basket cases.