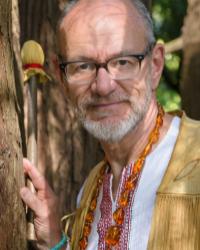 Frank Coppieters was born in 1950 in the historical city of Ghent, in the Dutch speaking part of Belgium and became the middle one of three brothers.

His father was a grade school teacher who played a (minor) role in the resistance movement during the war. His mother stayed at home to take care of her children.

At the age of four he had a near death experience which set his path to become a mystic later in life. At the age of 22 he started a daily meditation practice which he never discontinued.

He always studied hard and excelled academically. He received his Master’s degree in Literature and Linguistics at Ghent University in 1972 and obtained his Ph.D. with a dissertation about ritual and avantgarde theater at the University of Antwerp in 1977.

He received grants to study in Paris, Oxford, New York University and the Naropa Institute in Boulder.

In 1973 he became an assistant professor at the University of Antwerp where he later obtained tenure at 27. For 13 years he would teach classes and workshops in literary theory, semiotics and the history of the avantgarde theater.

With the approval and support of his department Frank started a Center for Experimental Theater on the university campus where many renowned artists would come to perform and teach workshops. Many awakenings took place as Frank participated in these workshops himself. Especially in his work with the Polish shaman and theater director Jerzy Grotowski and his associates.

The biggest event during this period was his meeting with the extraordinary Hungarian shaman, artist, and sound master Jóska Soós, who had lived in Belgium since 1946, and with whom Frank apprenticed for 30 years.

In 1985 Frank immigrated to the US and settled in Portland, Oregon with his wife Kathy Melcher. They met at the Osho community where Frank lived for two years.

Frank has worked with shamans in Peru, Indonesia, Bhutan and Poland.

Today Frank teaches Reiki and shamanic workshops locally and internationally often in collaboration with Kathy who is a therapist. He has a private practice in his home in SW Portland and also online.

In his new book Unity in Everything That Is: Enlightened Warriorship Under the Guidance of 13 Masters Frank chronicles what he has learnt and received from his many amazing teachers.

It is available on Kindle, as an audiobook narrated by Frank, and as a paperback through his website www.livinglightcenter and can also be purchased at Amazon.