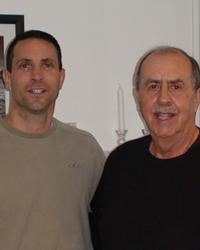 Frank Terrazzano is a native of Boston. He worked for more than thirty years in the frozen-food industry and was responsible for purchasing as well as production planning and scheduling for Louise's Home Style Ravioli, the largest manufacturer of Italian pasta products in New England. Among his hobbies that include gardening and cooking, he shared a passion for photography and kite flying with his daughter, Lauren. He and his wife Virginia Ginny have been married since November 8, 1964. They reside in southeastern Massachusetts. Lauren was their only child.

Newsday columnist and Pulitzer Prize-winning social journalist Lauren Terrazzano championed the causes of abused children, the elderly, and the homeless, truly becoming a voice for the voiceless through her writing by taking global issues and personalizing them to dramatize how they affected individual families and people. Not infrequently, her stories would force change in people's thinking and in governmental policies. Lauren infused every journalistic story she crafted with passion. That included her own story: at the age of thirty-six, Lauren--a non-smoker--was diagnosed with lung cancer. Until her death three years later, Lauren turned her incredible drive and her passion for communication into putting a human face on her disease and raising public awareness of lung cancer.


Her boss at Newsday gave her a weekly column called "Life, with Cancer," and it was through this column that Lauren candidly shared her day-to-day experiences and shed light on lung cancera disease that kills more women each year than breast, ovarian, and uterine cancers combined.


With the help of coauthor Paul Lonardo, Caught in the Act, devoted father Frank Terrazzano tells his daughter's compelling life story through the eyes of the many people whose hearts and lives Lauren touched. Lauren's friends, colleagues, coworkers, doctors, and even her college professors, collectively paint an accurate and touching portrait of Lauren the person and the journalist. Reflecting on his daughter, Frank writes of Lauren as "A beautiful young lady who believed that 'The Pen Is Mightier than the Sword' and chose to use her pen as a lighta light to shine in dark places exposing society's many shortcomings." Including a foreword by best-selling author Anna Quindlen, Life, with Cancer begins with Lauren's early years as a journalist, and with the intensity of the journalist herself, covers her larger-than-life experiences. A tapestry of Lauren's life is woven together throughout the course of the book, taking into perspective her childhood, her accomplishments as a young journalist, and the final three years of her "Life, with Cancer." These three major components are combined in each chapter to tell Lauren's complete story.