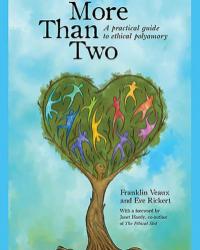 Eve Rickert is a professional writer, editor and mastermind, and the co-author, with Franklin Veaux, of the newly released polyamory book More Than Two. Until taking time off from life to write the book, she co-organized a group for poly women in Vancouver, Canada and she blogs at the More Than Two website. She owns a science communications firm in Vancouver, Canada, called Talk Science to Me.

Eve has been living poly since 2008, though her poly roots go back much deeper. Her approach to poly has changed radically over the years: from early experiences in high school, to first hearing the word “polyamory” in 1998, to first swingers’ party in 2006, to her current three long-term relationships. And being poly has radically changed her. She's made a lot of mistakes and learned a lot of hard lessons. She co-wrote More Than Two to share those experiences with anyone who is struggling to maintain ethical multiple relationships with integrity, compassion and courage.

Franklin has been ideologically polyamorous his entire life, functionally polyamorous since 1984, and writing about polyamory since 1998. Monogamy has never made much sense to him. (When he heard a fairy tale  about a princess forced to choose between two handsome princes, he thought “everyone knows princesses live in castles. And castles are big enough for both princes. So why does she have to choose?”)

He started practicing non-monogamy from the moment he started becoming aware that boys and girls are different. Along the way, he's made just about every mistake it’s possible to make in polyamorous relationships. Good judgment comes from experience, and experience comes from poor judgment.

Today, he has five partners, lives in Portland, Oregon, and spends a great deal of time writing about everything from relationship ethics to transhumanism to computer security. His new polyamory book "More Than Two," co-written with Eve Rickert, has just been published.