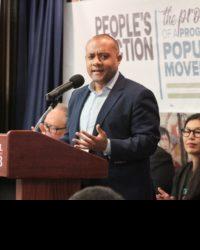 Garrett Arwa currently serves as the National Political Director for the National Democratic Redistricting Committee, a position he has held since April of 2019. In that role he currently oversees a political effort that pushes key resources to elected leaders and key allies involved in the redistricting process in every state in the country, and helps develop a state-specific strategy to fight for fair maps. Those resources include technology, strategic planning, message guidance, and grassroots activism. He also oversees a lobbying effort that includes registered lobbyists in eight states. In 2020 he oversaw the NDRC’s $8 million electoral operation and endorsement process.

Prior to this role, Garrett serves as the Chief of Staff for For Our Future PAC and For Our Future Action Fund (FOF).  FOF spent $100 million from 2016 to 2018 mobilizes voters and engaging on key progressive issues in nine states across two election cycles. In his role as Chief of Staff he oversaw the operations, HR, and legal departments. At the beginning of his time at FOF, he developed the FOF partnership program, which pushed millions in voter mobilization grants to dozens of community-based organizations in nine states. He also managed a federal issue advocacy portfolio in 2017.

Prior to this role he serves as the Director of Engagement for NextGen Climate in San Francisco, where he directly coordinated with four state teams, managed several national partnerships centered around a national clean energy campaign, and did outreach to progressive organizations to determine the scope of NextGen’s 2016 electoral efforts.

Prior to that he spent six plus years working at many levels of politics and advocacy in Michigan, including served as the Executive Director of the Michigan Democratic Party, as the Constituency Director for President Obama’s re-election campaignin 2012, Coordinated Campaign Director in 2010 and 2012, and State Director for Organizing for America.

Garrett got his start in politics working in 2007 and 2008 on the Barack Obama Campaign. This included primary campaigns in NH, GA, and TX, as the general election in Florida. He also worked a Congressional Special election in 2009 in NY-21.

Garrett is a proud Syracuse Orangemen where he received a BA in Broadcast Journalism. He also has a Master’s degree in International Relations from the University of New Hampshire. His father is from Tanzania, his mother was born on an army base in Guam, and his parents met in the Peace Corp in Nairobi in the late 1970s.