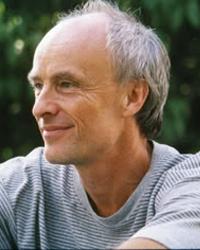 Born in 1945 in postwar Germany, Deuter studied the flute, taught himself guitar and just about every instrument he could get his hands on, though it wasn't until after a near-fatal car crash in his early twenties that he decided to pursue a career in music.

Deuter describes himself as a hermit/monk/wolf living in the wild and enjoying it. He designed his house using the principles of Feng Shui. The studio, with its large windows and views of the forest, is a sanctuary--a laboratory for music-making that includes instruments from all over the world.

Over the years, Deuter has continued learn and master a vast array of instruments, including the drums, the shakuhachi flute, the koto, sitar, Tibetan singing bowls, santoor, bhuzuki, piano and keyboard.
He's recorded and released over 60 albums and has sold too many records to count.

"One thing that is important for me is that I love dancing on the edge of the unknown; to play around and open doors I haven't walked through before," says Deuter. It is this very outlook that has kept him at the forefront of musical evolution for over 35 years.