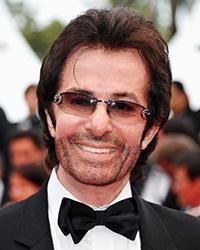 George Chakiris made his film debut at the age of 12 singing in the chorus of Song of Love 1947. Following his graduation from high school, he supported his night-time dancing, singing and dramatic lessons with a daytime job clerking in a Los Angeles department store. Later he started his acting/dancing career appearing in musicals such as Gentlemen Prefer Blondes 1953--he is one of the ballet dancers escorting Marilyn Monroe in "Diamonds Are A Girl's Best Friend"--White Christmas 1954, The Girl Rush 1955, There's No Business Like Show Business 1954, Brigadoon 1954, and Meet Me in Las Vegas 1956. In 1957, he made his debut as a dramatic actor in Under Fire 1957. In 1958 he traveled to New York hoping for a Broadway "break." Hearing that Jerome Robbins was casting the London company of "West Side Story", he auditioned and was awarded the co-starring role of Riff. He played the part for almost two years on the West End stage before acting, singing and dancing as Bernardo in the Robert Wise film version West Side Story 1961, a performance that earned him a Golden Globe and the Academy Award for Best Supporting Actor.


Since then, he starred in a succession of films, including Diamond Head 1963 with Charlton Heston, Bebo's Girl 1964 with Claudia Cardinale, The Young Girls of Rochefort 1967 with Catherine Deneuve, Franoise Dorlac and Gene Kelly, The Big Cube 1969 with Lana Turner, Why Not Stay for Breakfast? 1979, Jekyll and Hyde... Together Again 1982, and Pale Blood 1990. He is one of the most traveled stars in motion pictures, having been to such locations as Hawaii, Japan, Mexico, Italy, England, Spain, and France. His nightclub career was launched to rave reviews at Caesar's Palace in Las Vegas and Harrah's Club in Lake Tahoe.


He has released several records: "George Chakiris," "Memories Are Made of These," "The Gershwin Song Book," "West Side Story's Dynamic...". Recently, he has appeared in several plays and stage musicals: after "The King and I" in the US in 1995, he performed in Britain the role of Rochester in "Jane Eyre."