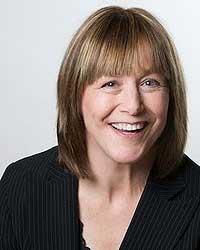 Geri Jewell is best known as Cousin Geri on the NBC sitcom, The Facts of Life. She was the first person with a disability, to have a regular role on a prime time series. She began her career doing stand up comedy at the Comedy Store in 1978.


After her ground breaking role on Facts she has appeared on such shows as The Great Space Coaster, the Emmy award winning movie Two of a Kind, Sesame Street, 21 Jump Street, Young and the Restless, Strong Medicine and the HBO hit series, Deadwood, which she also received Emmy consideration for. She also co-starred in the independent film Night of the White Pants and was featured on the FOX series, Alcatraz.


When Geri is not working in television, she is a highly sought after motivational speaker and trainer in the areas of diversity, disability and GLBT issues. Her training has taken her to such companies as Hewlett Packard, Master Foods, Johnson Wax, AT&T, Amgen, Mass Mutual and Raytheon. She has also trained such government agencies as The C.I.A., The U.S. Treasury Department, Defense Intelligence Agency, and the U.S. Army.


She is famous for her uncanny ability to captivate the hearts of her audiences by using humor to facilitate attitudinal change. Geri brings to her presentations her personal experiences in life, which in turn allow people to gain insight into the prospect of seeing disability in a totally different light, creating hope where there is none, and joy where there is pain.


In addition to her ongoing speaking circuits, she has never forgotten her roots in comedy. She has appeared on many of the cable comedy shows, including Evening at the Improv on A&E, and Stand Up Spotlight on VHI. She has opened for Paul Anka, Robert Goulet, and Judy Collins. She has been featured on Entertainment Tonight, E Hollywood True Story, and ABCs 20/20, and A&E's Biography.


All in all, Geri is enjoying a thriving career. She has been the recipient of many awards, including the 1992 Founders Award, the 2005 Independent Living Legacy Award, and the 2006 Victory award. Her NEW autobiography, I'm Walking as Straight as I Can received the 2012 Gold Award by the Independent Publishers.