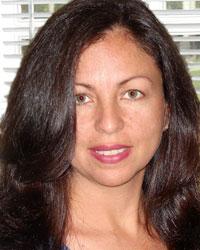 Prior to becoming ill, Gisella was a translator in the medical and high-tech industries. She is fluent in Spanish and proficient in French and Portuguese. Gisella now spends her time being a mom and wife and helping others with chronic illness through Quantum Techniques.

Gisella is a melanoma cancer survivor and was a long time sufferer of multiple chemical and electromagnetic field sensitivities. Her sensitivities were so extreme that she lived in one room, sat outside on the beach, or sat out in a field for years. Gisella lived an isolated life from her husband and three small children. She sometimes slept in her car when symptoms were at their worst. After trying many traditional and alternative medical treatments, and even learning some of them, such as Reiki and N.A.E.T., she had no success in her personal healing. Gisella then discovered Quantum Techniques, which has been the key to her successful healing.