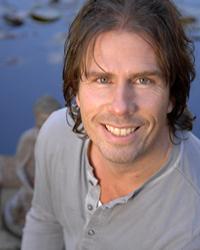 Hans de Waard is a professional trainer, developer, international speaker and founder of the Jacket technique. His book The Jacket Technique will be launched on 28th Sept this year in the UK, US, and other English speaking countries. After studying physiotherapy, he worked in the pharmaceutical and orthopedic reconstruction industries. Subsequently, he started a medical development business which, amongst others, developed a State of the Art non-cemented hip prosthesis, the Symax. From an early age, like many other people, Hans felt hindered in daily life by these blocks he carried in his back pack and invisible cords with other people. He felt tense and insecure when people sat beside him or felt drained when he walked in crowded places. He found out that these inner blocks were reflected by situations and people he met. For example, if you have angriness inside you will attract angry people. So instead of blaming others he started working on himself. He investigated and experienced all kinds of energy treatment techniques, but none were fulfilling. As a result, he developed the Jacket Technique, a psychological method which removes and transforms unwanted blocks such as negative life patterns, fears, insecurities and convictions to progress, often in one session, blocks are defined as jackets. This powerful technique is recognized by many Dutch healthcare organizations and Hans has trained more than two thousand practitioners throughout Europe, Belgium, Norway, US and the Caribbean. In November, there is an introduction tour planned for the UK London and Bristol.
The essence of a meeting seldom lies in the words that are spoken