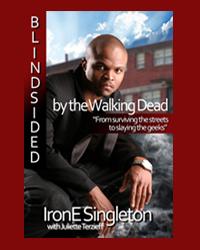 IronE Singleton is best known to audiences as the menacing kingpin Alton in the Academy Oscar Award-nominated film THE BLIND SIDE; the biggest box office grossing sports movie of all time. He is also known as the compassionate tough guy, T-Dog, in the Emmy, AFI and WGA Award winning, Golden Globe nominated TV show THE WALKING DEAD; one of basic cable's highest rated shows for viewership. IronE's unusual name depicts his life story, his ability to play strong, multidimensional characters and has made him a memorable actor in both film and television.


Singleton appears on the big screen alongside Bow Wow and Ice Cube in "Lottery Ticket." He stars alongside Nicolas Cage, Guy Pearce and January Jones in the feature film "Seeking Justice" and will soon captivate the Lifetime audience in his leading role as "Glock" Nichols with Neve Campbell in "Sworn To Silence." Singleton's talent is on display in several television pilots, including ABC's "Detroit 1-8-7," VH1's "Single Ladies," and TNT's "Franklin and Bash." Among his other television credits are CW's "One Tree Hill" and BET's "Somebodies." As a result of IronE's success on The Walking Dead, IronE has been sought to write an introduction for two zombie theme anthologies; Zombie Survival Crew: Undead Is Not An Option and Appalachia Undead.


Born and raised in Atlanta, GA, Singleton's story embodies everything we have come to understand about the lives of many inner city youth growing up in low-income housing projects. Fatherless and having lost his mother to HIV/AIDS when he was a senior in high school and watched his brother spend most of his life in Georgias prison system, IronE fought to have a life far different from the one he knew growing up. The "irony" of his story is that, while all the odds were stacked against him, IronE Singleton still overcame his troubled childhood to attend the University of Georgia on academic and football scholarships where he completed a double major in Theater and Speech Communications.


Prior to breaking into film and television, Singleton put on a one man theater show entitled IronE..... The Resurrected which garnered rave reviews. In his spare time, Singleton is a motivational speaker and youth sports referee.


Prior to breaking into film and television, Singleton wrote, directed and performed a critically acclaimed One Man Stage production entitled "IronE ...The Resurrected" which garnered rave reviews. He is now in the process of transcribing the production into a semi-autobiography book manuscript which chronicles his life from poverty to fame; available spring 2013. His ambition is to have it produced as a movie along with his current screenplay "Volleyball Vixens." IronE is also overly enthusiastic about incorporating his non-profit performing arts school, IronE School of The Arts ISA which will provide youth with a performing arts program that is intellectually stimulating, emotionally compelling, aesthetically enriching and personally relevant with a strong emphasis on truth, purpose, respect for self and others and love for all of humanity. In his spare time, Singleton is a motivational speaker and lyricist. Samples of his music, including titles such as "We Are The Walking Dead" and "The Blind Side" are available at www.IronEsingleton.com. Singleton divides his time between Atlanta and Los Angeles with his wife and children.

"She told me purpose in life is to help others search for theirs' and on that journey you will find yours....inspire humanity."