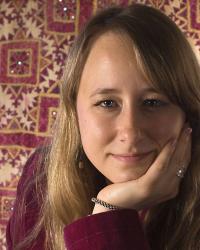 Isadora Gabrielle Leidenfrost, PhD is trained as both a filmmaker and as a textile historian. She holds a BFA from the Rhode Island School of Design and a Masters and a PhD from the University of Wisconsin-Madison. Isadora has owned and operated Soulful Media, her film production company since 2004 and has produced 12 films since she began. Inspired by multicultural textiles and women's studies, Isadora's seeks to inspire people and to show them about rare, under studied, and exquisite of traditions from around the world.