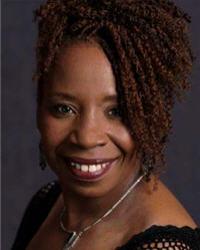 Rev. Dr. Iyanla Vanzant's story reads like an epic adventure filled with near misses, struggle, strength, courage and triumph From her lifes experiences she has uncovered her lifes purpose, discovered the power that lies within and recovered her spiritual self and has emerged as a living testament to Gods Prevailing Peace, Power and Presence.

In 1990 with seemingly little notice, her path to working with mans law transformed and suddenly made way to a divine appointment with Spiritual Law. This union gave birth to her work of service to the Universe and manifested in the form of workshops, lectures, television appearance, and best-selling books wherein Iyanla shared Spiritual Law and Principles.

Rev. Dr. Vanzant travels globally and appears on the NBC Daytime Drama, Starting Over 2004-2006 passionately delivering her special brand of self-empowerment and inspiration to others. As Founder and Director of Inner Visions Institute of Spiritual Development, Iyanla shares her knowledge of Universal Principle and Law, Eastern and Western spiritual/religious traditions/teachings, and the truth of Unconditional Love to motivate others to create a better life, a better community and a better world