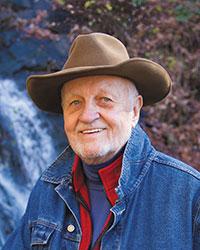 Jack Perkins, Emmy Award-winning journalist, has worked for over forty years in television and radio, including stints as an NBC News correspondent, and most recognizably, as host of the acclaimed A&E series, Biography. He has interviewed some of the most notable celebrities and politicians of our time and covered some of the most dramatic events of the past century, including the Civil Rights struggle, the Cuban Missile Crisis, and the Kennedy Assassination.


Once dubbed America's "most literate correspondent" by the Associated Press, Perkins continues to be as active in his retirement as most people are at the height of their careers. His narration can be heard on videos for Acadia National Park, the Biltmore Estate in North Carolina, and the Edison Museum in Ft. Myers, Florida. He contributes a regular column to Venice Magazine and hosts A Gulf Coast Journal with Jack Perkins on WEDU, PBS for western Florida, which is carried by several other PBS affiliates nationwide.


Jack is also a respected nature photographer and poet a "poetographer," as he describes himself with several published books to his credit, books that over the years have become more and more an expression of his growing faith. Jack lives today in Florida with Mary Jo, his wife of fifty-three years.