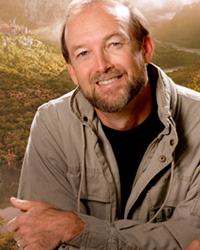 James Redfield was 43 when he published The Celestine Prophecy. He has been keenly interested in human spirituality all of his life. Born on March 19, 1950, he grew up in a rural area near Birmingham, Alabama. From an early age, he was motivated by a need for clarity about spiritual matters. Brought up in a Methodist Church that was loving and community-oriented, he was nevertheless frustrated by a lack of answers to his questions about the true nature of spiritual experience.

As a young man, he studied Eastern philosophies, including Taoism and Zen, while majoring in sociology at Auburn University. He later received a Master’s degree in counseling and spent more than 15 years as a therapist to abused adolescents. During this time, he was drawn into the human potential movement and turned to it for theories about intuitions and psychic phenomena that would help his troubled clients. All along, Redfield was forming ideas that would eventually find their way into The Celestine Prophecy. In 1989, he quit his job as a therapist to write full-time, synthesizing his interest in interactive psychology, Eastern and Western philosophies, science, futurism, ecology, and history.

Using an adventure parable approach The Celestine Prophecy created a model for spiritual perception and actualization that resonated with millions of people and focused on the mysterious coincidences that occur in each of our lives.James Redfield is the #1 Best Selling Author of the CELESTINE PROPHECY SERIES OF BOOKS, Lecturer, Filmmaker, Therapist, and Writing and Business Consultant. Together the books have spent over three years on the New York Times Best Sellers List.

His awards include the prestigious Medal of the Presidency of the Italian Senate, The Auburn University Humanitarian of the Year Award, and The International New Thought Award. Additionally, James is perennially included in the Watkins List of the 100 Most Spiritually Influential Living People. James is currently engaged in a world-wide Celestine Prophecy “Inspiration” Tour. www.celestinevision.com