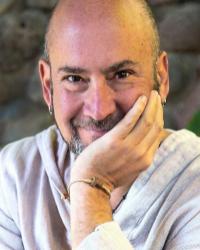 James Twyman is the New York Times bestselling author of 16 books, including "Emissary of Light," "The Moses Code," "The Barn Dance" and his latest "Giovanni and the Camino of St. Francis." Known around the globe as the 'Peace Troubadour,' in 1994 James put peace prayers from the 12 major religions to music and began traveling the world performing concerts to groups of thousands to spread his message of peace. Along with millions of people participating in nearly a dozen worldwide prayer vigils, James experienced the power of focused prayer when he performed the peace concert in countries like Bosnia, Iraq, Serbia, South Africa, Israel, Northern Ireland, and many other war torn areas of the world.

Producer/director of eight feature films, including the award winning "Indigo" and "Redwood Highway" and his latest "Becoming St. Francis," a documentary about his journey across the US performing the one man musical "Brother Sun, Sister Moon."

A professional musician, singer and songwriter who learned to play the guitar at the age of 12 under the instruction of Fr. Vince Ferraro, his parish priest, James has since recorded and produced sixteen CDs including "I AM Wishes Fulfilled" with Dr. Wayne Dyer which sold over 350,000 copies and was a Billboard Chart bestseller.

James was consecrated as an anchorite in 2020, following a medieval contemplative tradition of being locked inside a tiny enclosure focused on prayer and meditation. The anchorhold where he lives is located at Namaste Lake Chapala in Ajijic, Mexico.