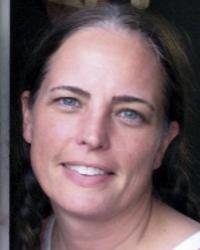 December, 2010, Jane directed her first feature, "Meth Head," starring Lukas Haas, Blake Berris, Necar Zadegan, and Wilson Cruz. Last winter she produced the feature film, "Elena Undone," for writer/director Nicole Conn, Little Man, Claire of the Moon. The film premiered at Frameline June 2010 in a sold out 1400 seat theater, and recently won Audience Award for Best Feature. The film is distributed by Wolfe Releasing.
In 2001, two days after 9/11 our dog, McQueen, was stolen out of our yard. He was a wedding present and was greatly loved. We named him McQueen because he was a Papillon, and we thought it was cute to name him after Steve McQueen from the movie, "Papillon."

The loss of McQueen was heartbreaking and we were not willing to take it lying down. We went to great lengths to get him back, including following the advice of a pet communicator After four months of searching we had to accept that we would probably never see McQueen again.

In 2003, we made a movie about our experience, which turned out to be a very universal story. The movie found success and was the beginning of our company. So in honor of our little dog and in acknowledgment of all he taught us, we named our company after him. Of course, there was the film part, too. And, thus was born, FilmMcQueen.
Her seventh short, "Beyond Words," Jane wrote and directed for producer Pete Maggi "Merchant of Venice," "Irresistible," "Head in the Clouds". The film recently won the Illuminate Award and is currently on the international fest circuit.

All prior films have seen Jane multi-tasking as producer/director/writer/editor, including "The Touch," which played 30 festivals and aired on HERE TV fall 08; and "Carrie's Choice," which was made with the support of Planned Parenthood - LA. Both films were fiscally sponsored by Women Make Movies and supported by the Panasonic Digital Filmmakers grant. "Carries Choice" won 1 award, was nominated for best short, was a finalist in the USA Film Festival and is now distributed with Intermedia, Inc. Prior to that was "A Host of Daffodils," which played in 16 festivals, earned 2 awards, was nominated 4 times for best short film. In 2008, Jane made two no-budget shorts, "Miss-Taken," a 3 minute film made on the Flip Camera at the Cannes film festival that can be seen on YouTube and "MOM" which is distributed by Intermedia, Inc.

Jane began her career as an actress including a recurring on "Chicago Hope." She has spoken on panels covering film production, fundraising, marketing and distribution, most recently addressing the topic of filmmakers and social change. She is currently writing a book on making short films from Idea through Distribution, and devotes time as a board member and programmer to the Woods Hole Film Festival in Cape Cod, Massachusetts.