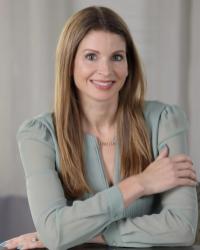 Jen Maxfield is an Emmy Award–winning reporter and anchor who joined NBC New York in 2013. Prior to joining the station, she worked for Eyewitness News (ABC7) in New York City as a reporter and substitute anchor for ten years. Maxfield started her broadcast career in 2000 in upstate New York before moving to New York City in 2002. She has reported live from thousands of news events over her 22-year career and estimates that she has interviewed more than ten thousand people.

Maxfield is an adjunct professor at Columbia Graduate School of Journalism at Columbia University. A graduate of the class of 2000, she enjoys coming back to her alma mater to educate a new generation of journalists.

Maxfield and her husband met as undergraduates at Columbia University. They live in New Jersey

with their three children and dog.

Maxfield’s first book, More After the Break: A Reporter Returns to Ten Unforgettable News Stories, will be published on July 12, 2022 and is available for preorder now.