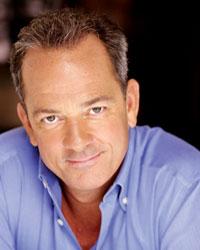 Twenty-five years ago Jesse Dylan received a reply letter from a radio station that said he had no personality and they wouldn't hire him, not even for the all-night show.

Not long after that, Jesse was named on-air personality of the year nationwide and featured in a documentary as one of the top 5 radio personalities in the world. He became one of the country's top morning radio personalities and won many prestigious awards.
Says Jesse, "It was a lesson I learned early on about following my dreams and not the opinions of others".

In the spring of 1997 Jesse was training for the World Long Distance Championships as a member of the National Canadian Triathlon Team. After being told by doctors that he would have to give up the sport of triathlon due to a chronic back injury, Jesse was introduced to a product that gave him a profound experience.

Jesse successfully competed in the World Long Distance Championships in Nice, France in June of that year. He became so intrigued by alternative healthcare products that he began building a business dedicated to helping people enhance their overall wellness - in mind, body and spirit.

"We are seeing a huge shift in society towards alternative complementary medicine," Jesse says. "Collectively our priorities are shifting. We're recognizing that the most important thing is a holistic approach - wellness in every sense of the word."
Today The Good Life Show Health Anti-Aging Lifestyle Options is a multimedia company with a syndicated nationwide radio program. In addition to hosting The Good Life Show Radio, Jesse is The Good Life Show's President and CEO.

The Good Life Show stands out as a professional, entertaining radio program that focuses on wellness without being an infomercial. With guests such as Dr. Deepak Chopra, Mark Victor Hanson, Robert Kiyosaki and Dr. Michael Roizen, The Good Life Show Radio has become a meeting place for some of the world's great leaders. They are joining Jesse in his quest to build the world's first organization specializing in maximizing human potential.

Jesse walks his talk and lives his dream. He's still training for triathlons. Along with his wife of 23 years, Jesse is very involved in the lives of his three teenage sons. And through The Good Life Show, he is providing a platform that allows others to attain their dreams.