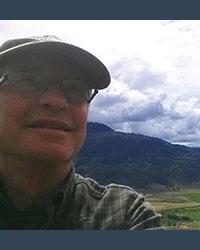 Jim Freese grew up above Thornton Creek, a stream in North Seattle that originates in what is now a parking lot adjacent to Northgate Mall, the first mall built in the United States. Jim lived in one of 6 houses aside a large forest above the creek. He and his mother spent their long summer days hiking through the forest, around the swamps and through the meadows: catching fish, discovering bird nests and collecting an occasional pollywog.


Between Jim's 10th and 12th years the entire forest was logged and replaced with roads and houses, Thornton Creek was polluted and its headwaters were buried in asphalt. The small swamps were drained and filled in, one by one the familiar meadows turned into lawns and driveways, pathways were bulldozed and fenced and slopes to the creek were terraced with rockery and speckled with "No Trespassing" signs. Jim experienced incomprehensible loss. His attempt to understand this loss became a fundamental factor in his life.


Dropping out of college, Jim flipped hamburgers until he was accepted in an apprenticeship program with the International Brotherhood of Electrical Workers.


The Vietnam War was raging during Jim's apprenticeship and, with the loss of a personal friend; Jim began to question the basis for that war. He, like many, agitated for change and experienced a sense of accomplishment, though bitter, when collective demands for policy change led to an end of the war.


At thirty Jim married his wife Carolyn and, with two stepsons, laid down his wandering and focused all of his efforts toward work, household and the new mortgage payments. His wanderlust was sated somewhat by hikes, climbs and fly fishing outings. He became "the neighbor" the "father" the "husband." This routine lasted until his two stepsons were out of school. Then in 1984 Jim's employment future was impacted by the double effects of union busting and a construction market crash and a new door opened on Jim and Carolyn's life.


Within two years Jim and Carolyn were back in Bothell Washington and Jim was offered a job working for Local 46 as the first dedicated Organizer the union had in 30 years. Dramatic years lay ahead. Less than 4 months after taking the job a union meeting of record size 600 voted 70% yes to fund Jim's organizing proposal at 1.5 M a year.


As intense as all of this was, Jim also returned to school to get a degree in Labor Studies from the National Labor College in Silver Springs Maryland and served the office of President of the union as well as Organizer.


Jim's organizing at local 46 lasted through the terms of 5 administrations followed by an organizing stint with the National and Local Building Trades Councils. He had a longing to return to construction and a simpler life and managed to do so in the last year before he retired at 55.


The retired time lasted for seven years. Jim and Carolyn remodeled their house doing 90% of the work themselves. Jim took up writing, painting and woodworking for hobbies to go along with fly fishing, hiking and bicycling. Then came the forest....


Their neighborhood in Bothell Washington was at a stalemate over the conservation of a 64-acre forest known as The Boy Scout Property. They had fought to first stop logging and development and later to actually purchase the land but, after 10 years of effort, no land had been saved. Someone said, "Jim, you know about campaigns. Why don't you help?"


So...Jim, Carolyn, other neighbors and a Board of Directors, with stellar talents, rebranded the forest to become North Creek Forest instead of "The Boy Scout Assemblage", designed a campaign to include everyone's interest, and saved more than half of the forest within six months of their first meeting.


The first is to raise enough money to save the rest of the forest before spiraling land inflation takes it out of their reach. They have about 12 months. Remaining landowners believe they can wait that long then they will have to start building. They do not want to miss out on this housing cycle.


Second, volunteer stewardship hours tripled to 2000 hours last year and are expected to increase to 3000 hours this year. A Stewardship Committee is challenged to keep up.


Third, FNCF began education work by recruiting a few interns. Now whole classes are asking for opportunities to bring classrooms out for lessons in plant identification, forest succession, biology, hydrology, etc. The University of Washington, in particular, is very active and requires a lot of support.