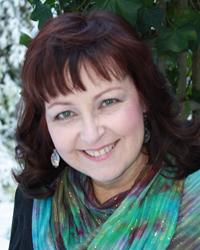 Joanna Powell Colbert is an artist, writer, and teacher of tarot and earth-centered spirituality. The Gaian Tarot, nine years in the making, combines her love of archetypal art with the mysteries of Mama Gaia, the natural world. A Collector's Edition is nearly sold out, and a mass market edition was published by Llewellyn Worldwide in September 2011.

Joanna teaches online courses and workshops around the country on the tarot, earth-centered spirituality, manifesting your dreams, and connecting with the natural world. She also hosts an engaging membership site, the Gaian Tarot Circle, which is a community for lovers of the Gaian Tarot. Joanna regularly shows her artwork and teaches workshops at tarot conferences and other events around the country.

The Gaian Tarot was created during the decade Joanna lived on a small island near Bellingham, Washington. Today she lives in the woods outside town, where daily encounters with the mysteries of the natural world continue to inspire and inform her work.