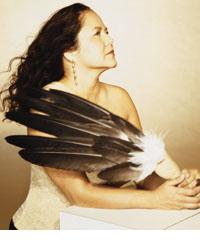 GRAMMY AWARD WINNING Shenandoah is a Wolf Clan member of the Iroquois Confederacy -Oneida Nation. Shenandoah has 14 recordings and her music is on 40 plus compilations. Her original compositions combined with astriking voice enables her to embellish the ancient songs of the Iroquois using a blend of traditional and contemporary instrumentation. Ms. Shenandoah's music reflects the indigenous philosophy and culture which continues to have a profound effecton the world today. From traditional chants to contemporary ballads about Native ways, her music has been described as anemotional experience, a Native American Trance. Shenandoa appeared on stage at Carnegie Hall, The White House, Kennedy Center, Woodstock 94, Earth Day on the Mall, and the Special Olympics performances nationally and internationally.