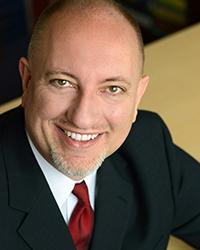 Joel Fotinos, the Spiritual Businessman, is vice-president and publisher at Tarcher/Penguin, and the co-author of THE PRAYER CHEST, which Judy Collins called "a wonderful and enlightening book." The book was a Family Circle "Book of the Month," as well as endorsed by Christiane Northrup, M.D., Julia Cameron, Catherine Ponder, and many others. Fotinos has also written or co-written several other books, including MULTIPLY YOUR BLESSINGS, A LITTLE DAILY WISDOM, and THE THINK & GROW RICH WORKBOOK; his books have over 120,000 copies in-print, and have been published in 14 languages. Fotinos has been featured in many magazines and newspapers, and was given Science of Mind magazine's first "Spiritual Hero of the Year" award.

A licensed minster with the Centers for Spiritual Living, Fotinos travels the country giving talks and workshops on spirituality and inspiration. He also speaks once a month and gives on-going classes at the Center for Spiritual Living North Jersey. Fotinos has narrated a dozen audiobooks, including the nationally best-selling audio editions for Napoleon Hill's THINK AND GROW RICH and THE LAW OF SUCCESS, and he is the male voice for Penguin Classics's "Poems By Heart" and upcoming "Bible Verses By Heart" apps. He consults with businesses and individuals with his Soul Compass work, to help them create success, fulfillment, and purpose.