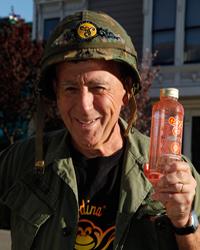 John Bello, Chief Executive Officer of Adina for Life, Inc., brings more than 30 years of brand building and marketing experience to the company. He is also currently a partner with Sherbrooke Capital, a Boston-based growth capital firm focused on investing in leading early stage companies in the health and wellness industry.

Previously, Bello served as Chairman of the Board of IZZE Beverage
Company and was Co-Founder and CEO for SoBe Beverage Company.
Before founding SoBe, Bello spent 14 years with National Football
League NFL Properties Inc., the marketing arm of the NFL, ending as
president. Bello was credited with the company's growth and as a
leader in sports marketing.

Bello also worked in the Pepsi Cola Division of PepsiCo, serving in
marketing and strategic planning capacities, as well as in the Maxwell
House Division of General Foods Corp., where he held product management roles with the Sanka and Maxwell House brands.
Serving in the U.S. Navy for four years during the Vietnam War, Bello
achieved the rank of Lieutenant Senior Grade and received the Navy
Commendation with Combat V for meritorious service on riverboats.
He was widely known to the Viet Cong as the Merchant of the Mekong
Delta.