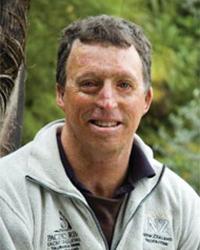 John Martin was born in Tauranga, New Zealand 1962. At age 13 push biked around New Zealand's East Cape. Then at age 16 he was 'booed' off the stage with backing band for "Split Enz" concert, resulting in early retirement from career as a rock star.

At aged 26 received burns to 70% of his body, face and hands when his crop dusting aircraft crashed and burned. He spent the next three months in intensive care in an induced coma, and underwent numerous medical procedures including skin grafting, debriding and reconstructive surgery. Within a year he returned to flying. He entered a partnership and purchased a branch of the company he previously worked for, providing the flying service to Motiti Island. A year later he set up his own Tandem Skydiving business which he still runs today. In quieter times John spends time cruising around the Coromandel Coast on his yacht where he continues to explore his new found passion for writing.

His first book, a short story called "Out of the Ashes" was used by several schools as a study aid and saw john listed with Celebrity Speakers NZ as a motivational speaker. John's story "Just shut up and jump" is not of one of self pity but a testament as to what a positive approach and never say die attitude can achieve.