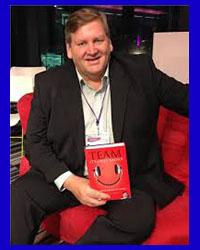 John Myers is a British radio executive, consultant and presenter. Myers developed the Century Radio brand for Border Radio Holdings in the early 1990's, launching two more stations later in the decade and featuring in the BBC documentary "Trouble at the Top."

He presented programs under the pseudonym 'John Morgan'. He then became Chief Executive of GMG Radio, developing the Real Radio, Smooth Radio and Rock Radio brands and overseeing GMG Radio's acquisition of the Century network from GCap Media.

In 2009, he was asked by the Labour Government to produce a report on the future of local radio in the UK The Myers Report which was published by the Department for Culture, Media and Sport in April 2009. A number of his recommendations were taken up by the Digital Economy Act 2010, leading to, amongst others, mergers within the Heart and Smooth Radio networks.

In 2011, Myers has reviewed efficiencies at BBC Radio 1, Radio 2, 1Xtra and 6Music. In April 2011, he assumed his role as Chief Executive Officer of the Radio Academy for a one year term. He's the Chairman of hospital station Radio Tyneside and makes occasional appearances on the Sky Newspaper review. His most recent report for BBC Management was on the operation of BBC Local Radio, published in February 2012. In 2014 he consulted Tynwald, the IOM Government on the operation of Manx Radio. Tynwald later publicly stated that the report commissioned was the most conclusive and constructive review into radio to-date. John is currently a Visiting Professor at the University of Cumbria and Sunderland. He is also a Fellow of the University of Cumbria. He recently published his book Team, it's only Radio about his 30 years in the media with all the profits donated to charity.