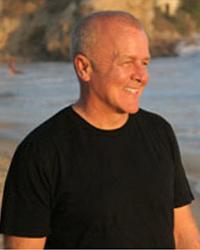 John Picard is one of the leading thinkers and builders of sustainable societies. He has conceptualized and built hundreds of the smartest homes, workplaces and communities in America and his vision guides the future planning of dozens of Fortune 500 Companies.

As a gifted builder and architect he has successfully translated many of his most innovative ideas into buildings, college campuses and even entire towns.

By explaining the elegant principals of Natural Systems Designs, John has led hundreds of influential leaders in business and government into a greener future, where sustainability is highly profitable.

The scope of John Picards influence in transforming the built world is unmatched. In 1990 Picard built one of the first modern homes to function totally off of the grid. He built the first LEED rated building in the US So Cal Gas, developed the first green film studio Sony, designed and developed the first green retail stores The GAP. In recognition of his pioneering work on green buildings, in 1994, Picard was appointed the lead consultant for the greening of the White House in the first term of the Clinton/Gore Administration. This project led to a sustained collaboration of the core founders and creators of the US Green Building Council. In 1995, Picard introduced a totally new way to green businesses, by using the Internet as a replacement for the built world. Gap.com became the first significant on line retail business which led to an explosion of sustainability practices online overnight.

John Picards major green projects include:
Helping design and build the Grand Wailea in Maui, first greening of a major hotel.
Directing sustainability of the largest mixed-use development in the US at the time at 20 million square feet
Helping design the MGM City Center the largest privately held development in the world at 35 million square feet, including raising 565 million in state and federal incentives for energy efficiency and water conservation projects related to the project.
Selected by Creative Arts Agency CAA As Sustainability director to influence environmental and sustainability messaging in the media TV, film and music. Including lead with Live Earth concert production team as Sustainability Director for the largest multi-city concert in history and the largest concert on climate working with Al Gore and other world-renowned climatologists
Designing and building Hangar 25, the first LEED aviation facility of 70,000 square feet at the Burbank Airport.
Designing and building the first LEED Platinum gas and service station for BP in Beverly Hills

Picards influence in popular culture is also pervasive: he designed and engineered the sustainability effort in partnership with Gregory Colbert for the traveling film and photo exhibit Ashes and Snow. This nomadic museum is the most visited exhibit in history, welcoming twice as many visitors on its five city, four year tour as the renowned King Tut exhibit.

More recently, Picard was featured as the green prophet in the Discovery Channel project, Greensburg. The two-year documentary series was dedicated to rebuilding a small farming town in Kansas, which was completely devastated by a series of tornados leaving only 2 standing structures. The show illuminates sustainable solutions throughout the rebuild and replacement of the towns infrastructure, residence and Main Street. Greensburg currently airs on Discovery Channels Planet Green.

Picards capacity for change thinking comes at a critical time when the pace of transforming societies for the health of the planet is both urgent, and supported by next wave technologies.