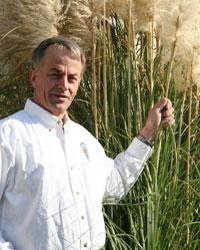 After five generations of conventional family farming, John Wood created a grass-fed, pasture-to-consumer meat, free-range poultry, and raw dairy business, near Canton, Missouri that has grown to serve the entire U.S., as well as several foreign countries. This has earned his company repeated national recognition for its tender steaks from The New York Times food editors.

Having led his local farm Bureau, as well as the Missouri Soil and Water Commission during the mid to late 1990s, Woods ongoing environmental passion culminated in his organizing of Missouri Wind Resources, LLC, which has been relentlessly pursuing a dream of an independent wind energy company owned by a large group of individual investors.