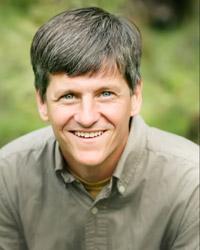 Jon Young's mentoring approach to developing nature connection, holistic human awareness, and peacemaking skills has spawned over 100 local schools and initiatives in the United States and Europe. Kids, teens, and adults have experienced the power of his work and communities, organizations, and institutions have looked for his advice. Jon is co-founder of the Wilderness Awareness School in Duvall, WA, and is currently teaching the blend of permaculture and nature awareness on the California central coast with other leaders in the field. He is author of Coyote's Guide to Connecting with Nature and Animal Tracking Basics.

Jon is married and has five children, ages 19 months to 25 years, and truly wants his children and future grandchildren to experience the joy and benefits of living in a whole and healthy world and as part of a remarkable community of mentors

Jon grew up in Monmouth County, NJ, and was mentored during his childhood from 1971-79 as a naturalist, tracker, survivalist, and mentor in a native American tradition by the tracker and author Tom Brown, Jr.; this mentoring forms the basis for Jons work. Tom Brown founded in 1978 the outdoor tracking and survival school The Tracker School in Asbury, NJ, where Jon worked off and on as an instructor, special guest and childrens program development specialist until 2001.

In 1994, Tom reminded Jon that Jon that he was the only one Tom had mentored the way Grandfather Tom's elder native mentor had mentored Tom. This sparked a focus on mentoring in Jon to try and capture and preserve these special nature-connection mentoring skills.

Inspired by his mentoring with Tom Brown, Jr., fueled by his studies in natural history and anthropology, and guided by the elder Ingwe, Jon has pioneered blending Native mentoring and cultural techniques from around the world with a broad array of tools for connecting with nature and developing refined and holistic tracking skills. Out of the Wilderness Awareness School, which was originally founded as a high school nature club and which helps people reconnect with their native environments, Jon developed a system that is now called 8 Shields Cultural Mentoring. This system tracks processes and mentoring techniques that are built into the design of one-on-one mentoring programs, family mentoring practices, community-based mentoring and more traditional modes of education. The 8 Shields Cultural Mentoring model has now influenced well over 100 nature and eco-community programs in the United States, Canada and Europe, and is also used in his consulting for organizations, government agencies and communities worldwide.

In the mid 1990s, Jon created the Shikari Method for track and sign data collection utilizing trained citizen volunteers to document activities of numerous wildlife species. This approach was used for various projects for the State of Washington on Natural Resource Conservation area lands, cougar monitoring, carnivore studies in suburban corridors and for an annual volunteer wolf survey to assist projects of the USFWS and the Wolf Recovery Program of the Nez Perce tribe 1998 to 2003. Currently utilized in the Bay Area of California for conservation land monitoring.

Jon has utilized the 8 Shields Cultural Mentoring model to develop and enhance community development for communities interested in working with peace-making as it relates to nature connection. This has evolved into a network of forming communities who are now linking up to support the release of Coyotes Guide to Connecting with Nature in the fall of 2008.

Jon has given over 1000 public presentations, and has helped many PhD and Masters students as well as undergraduates with the completion of their degrees on topics ranging from native education to wildlife tracking.