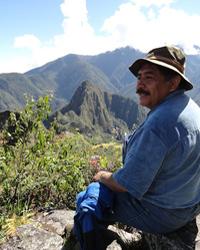 Jorge Luis is a recognized teacher of Inca spirituality and is considered a learned spiritual guide by people in many parts of the world. He has been invited to the United States, Canada, Belgium, the Netherlands and Turkey to lecture on his vast knowledge and understanding of Inca wisdom, culture and traditions and their essence in our lives today.

Jorge Luis is an indigenous Peruvian of Aymara heritage, who has been employed for over twenty years in tourism in the Sacred Valley, including Machu Picchu, and the Lake Titicaca region of Peru and Bolivia. It took many years and some very unusual events to shape Jorge Luis into a modern Inca chacaruna who effortlessly blends being a businessman and family man with performing powerful Inca ceremonies. Jorge Luis has hosted and remains in contact with such notable people as Don Miguel Ruiz and Bo Bingham, grandson of Hiram Bingham. Another friend is David Childress, author of the Lost Cities Series.

Jorge Luis is the founder and owner of Kontiki Tour Company and has built several hotels in Cusco and on the shores of Lake Titicaca. Most importantly, Jorge Luis is in personal contact with the Andean priests and people of many groups of indigenous people. In addition to his native Spanish, Jorge Luis speaks English fluently, as well as the three indigenous languages. He has a vast collection of antique textiles and artifacts, which he is currently organizing into a museum at Taypikala Hotel, Cusco.

Jorge Luis has been interviewed by journalists in Europe, and North America as a recognized authority on Inca philosophy and traditions. The BBC featured him in a documentary production of Everyman, and he is often interviewed for local television programs in Peru. He has also represented the Inca Nation when elders of North, Central and South America have gathered.

Jorge Luis is married with three children ages 22, 14 and 4 years. He lives in Puno, Peru and has been presenting workshops in South America, the United States and Europe .