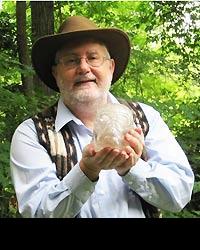 Joshua Shapiro along with his divine life partner Katrina Head are known as the Crystal Skull Explorers. They have been based in the Seattle area since 2011 sharing their crystal skull presentations and personal crystal skulls with people here.  Joshua began his work with the crystal skulls in 1983 when he saw a very old amethyst crystal skull now known as "AM-MEE" (Ami) in San Jose, California and this crystal skull telepathically told him the crystal skulls were returning to the public's attention to help humanity create world peace.  Since 1983, he has written several books, helped to organize public and on-line crystal skull conferences, been featured on numerous radio shows, participated in several TV documentaries, andgiven hundred of presentations all over the world.