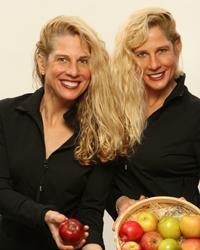 Judi and Shari Zucker, who enjoy a well-deserved reputation as the "Double Energy Twins", began their vegetarian life style as well as their career as cookbook writers while they were in high school.

The twins learned early that nutritious, whole foods gave them sustained energy and helped them to break the women's one-and two-mile track records at Beverly Hills High School. Enthusiastic about sharing their energy secrets, they published How to Survive Snack AttacksNaturally, 1979, when they were just seventeen years old. The book enjoyed such success that Judi and Shari soon followed their first book with How to Eat Without Meat...Naturally in 1981. Their third book, Double Your Energy with Half the Effort was published in 1991.

The Zuckers continued their study of health and nutrition at The University of California, Santa Barbara, where they graduated with honors in Ergonomics, the study of human physiology, physical education and nutrition.

Following graduation, Judi and Shari served as media specialists for General Mills, whose representatives had asked the twins to publicize the company's Nature Valley Granola products. After promoting and demonstrating healthy snacks on a six-week "Snack Sense" tour, the twins realized that they wanted to provide the public with additional information about sound diet and exercise programs. They taught Natural Foods Cooking Classes to adults and children.

Although Judi and Shari enjoy successful careers in real estate and interior design, the twins continue to create and compile recipes for nutritious low-fat, high-fiber foods. They also plan to package and market their "Zookie Cookie" a delectably wholesome morsel for which they have developed a closely guarded, exclusive recipe. In addition, the Zuckers appear on national and local television talk shows. They maintain their own fitness by running, swimming and walking daily.

Shari is married to Daniel Kilstofte, owner of a High Tech company, and they have three children. They have twin sons Max and Miles and a daughter Mattea. Judi is married to Chris Mjelde, a dentist. They have two children, a daughter Taryn and a son Tanner. Judi and Shari are living proof that their double energy lifestyle truly works