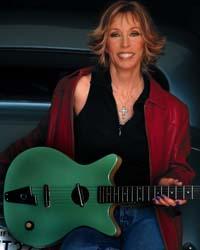 Never Out Of Style....
Juice Newton known for her impact on the pop, as well as the country music scene, exhibits diversity in her music as well as her stage show. Juice keeps her performances varied with the energy of her top-notch touring band, and the intimacy of an acoustic setting. Otha Young, Juice's longtime musical partner and songwriter, said, "With the band we have now can give the audience the full spectrum of Juice's music."

That spectrum is wide but identifiable. Juice Newton, through her pop and country hits, her distinctive voice and entertaining performance skills, continues to captivate audiences from teens to grandparents, from the city to the country. As a music critic stated, "Newton remains one of the most riveting performers in music, rocking on stage and playing each emotion for what it's worth. And it's worth a lot." double arrow

Juice's musical tastes were developed early. She grew up in Virginia Beach, where her Navy upbringing exposed her to a variety of musical influences. She could be found singing in area coffee houses developing her emotional, heartfelt folk songs. Juice went west for college and formed a folk-rock trio in Northern California. The trio developed a large following and became known as Silver Spur. Otha Young, Juice's longtime partner and songwriter was also a member of this eclectic, unique trio.

Because of their growing popularity, Silver Spur was told to go south. No, not to Nashville, but to Los Angeles, where after constant work in area clubs, they were signed to RCA. Their experience with RCA led them to Capitol records where Juice made her mark with such hits as "Angel of the Morning," "Queen of Hearts", and her first country hit, "The Sweetest Thing." Through the mid-eighties, she followed these hits with "Break It To Me Gently" , which won her a Grammy, "Love's Been A Little Bit Hard On Me", and "A Little Love". A second signing with RCA produced a string of top 10 country hits such as "You Want To Make You Mine", "Hurt", "Old Flame", "Cheap Love", "Both To Each Other", "Tell Me True", and "What Can I Do With My Heart?".

"Newton remains one of the most riveting performers in country music, any music, rocking on stage and playing each emotion for what it's worth". Juice and her band take the audience on an emotion filled ride from the stirring stillness of "The Sweetest Thing" to the rollicking "Love's Been a Little bit Hard on Me," with a big dose of other Juice favorites as well as her ever expanding repertoire.