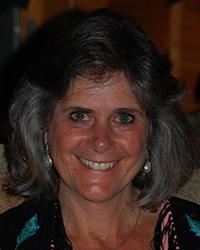 Katherine Roske, social pioneer, educator, author, ceremonialist and grandmother has a life long commitment to the realization of a co-creative planetary culture that is a living embodiment of our spiritual essence. As founding partner and steward of Hummingbird Community in northern New Mexico, she has developed and facilitated programs for the past 15 years focused on co-creative community building, conscious evolution and empowered youth leadership. As an active contributor to the newly developed Hummingbird Center for a Co-Creative World, she has recently co-taught the tele-course, "Living Co-Creation."


Katharine has been strongly influenced by her relationship with Barbara Marx Hubbard since 1974 and has been working closely with Barbara for the past year as a core member of her meta-design team, as well as being a Board member of the Foundation for Conscious Evolution. She is co-author with Carolyn Anderson of The Co-Creator's Handbook: an Experiential Guide for Discovering your Life's Purpose and Building a Co-Creative Society. Both the Handbook and Hummingbird Community are based on Barbara's template for the core group process building toward the emergence of a co-creative culture.


Katharine's professional career also includes facilitation of personal growth workshops and coordination of world-wide celebrations and link ups for peace including World Invocation Day Festival, John Lennon Tribute, Harmonic Convergence, and Birth 2012. She is also a co-founder of the "Path of Ceremonial Arts for Women," a laboratory of the Divine Feminine and a minister of "All Season's Chalice" / the "StarHouse" in Boulder www.pathoftheceremonialarts.org


Over the past 40 years Katharine's passion for integral education and cultural exchange have taken many forms including co-founding and teaching at numerous alternative and Waldorf oriented schools as well as co-facilitating cross cultural leadership programs including the International Children's Summit on Human Rights in Geneva, Switzerland, a UNESCO sponsored event: Youth for Human Unity in the international township of Auroville in southern India and the Pachamama Alliance/ Awakening the Dreamer training for youth at Hummingbird. She is a co-founder of Earth Guardians www.earthguardians.org and was co-director of the "Children's Torch of Hope Tour" across America in 1995.


Family is core to her life. Together with her beloved husband, Makasha Roske, Katharine has 8 children, 21 grandchildren and 13 great-grandchildren Celebrating 37 years of marriage they live in their honeymoon cottage by the creek at Hummingbird and are currently developing Hummingbirth as a core curriculum for conscious conception, pregnancy, and birth.