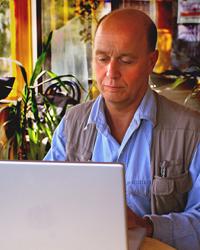 Keith Busha has been working in the performing arts for over 40 years as a filmmaker photographer, musician, and stage lighting designer. Keith is the director, producer and co-writer of the documentary film, Dreams of Damanhur. Keith also composed and played some of the music, shot all of the still photography and is the narrator of the film.

Keith lives in the San Juan Islands in the Pacific Northwest Of the U.S.