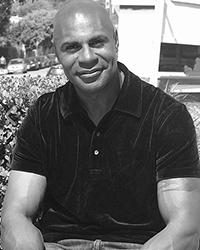 Kent Buckner is an Atlanta based trainer which has allowed him to work with Atlanta based celebrities like Dallas Cowboys wide receiver Terrell Owens. Working with Owens led him to also work with several other football players from the Cincinnati Bengals and Green Bay Packers. Thanks to the music scene there as well, he has worked with singer India Arie and rapper Bow Wow.

But Kent's clients are mainly Moms and people looking to lose weight. The things he talks about are the same things he would tell those clients; tips from celebrities that anyone can use. Some of the things he discusses include healthy food choices and exercise tricks. For example, when Moms are pushing their kids in strollers, they can do lunges to exercise their legs. he has produced a CD called "Balance Body System/Workout On-The-Go". The CD is like having a personal trainer there encouraging you and coaching you as you exercise.

Kent Buckner, has over 17 years of experience in fitness and nutrition
and is a certified, athletic trainer. He has worked one-on-one with
professional athletes and celebrities such as Terrell Owens Dallas
Cowboys, Theresa Edwards WNBA, and singing sensations, Bow Wow and India Arie. Buckner has also developed two On-The-Go workout CDs, "Cardio Blast Workout On-The-Go," and "Balance Body Workout On-The-Go," which was a cardio workout specifically designed for India Arie.

Buckner got his start in fitness from coaching basketball and developing unique training methods that resulted in many successful team championships and the launch of many careers of current basketball sensations. Currently, he is a co-partner with "Celebrity Personal Trainers" in Atlanta but also conducts boot camp style workouts nationwide. "Red Carpet Secrets For Everyone" Ever wonder why movie stars can stay so fit? It's the tricks they have picked up that no one else knows. But Kent Buckner knows.