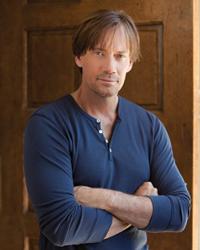 Best known as a strong leading man and a hunky Half-God, Kevin Sorbo was raised in Minnesota where he excelled at football, baseball, and basketball in high school while remaining close to the theater. After graduating from Moorhead State University, he joined a theater group and traveled to Europe and Sydney, Australia, where he modeled for print ads and appeared in over 150 commercials. When he returned to the states, he settled in Los Angeles and began making prime time appearances on such shows as Dallas and Murder She Wrote.


Kevin achieved small-screen stardom as Hercules on the hit Hercules, the Legendary Journeys 1993-1999. Following the success of the initial five, two-hour movies, the series exploded onto the mainstream, airing in 176 countries and surpassing ratings-topper Baywatch as the most watched TV show in the world. He also directed two episodes and co-wrote one installment of Hercules.


As season seven of Hercules was ending, Kevin signed with Tribune and went on to star in the lead role of Captain Dylan Hunt in Gene Roddenberry's, Andromeda, which debuted as the number one, hour-long show in first run syndication and remained at number one for the next five years. It was during this time that Sorbo was named the 3rd Most Bankable Star behind Oprah Winfrey and Regis Philbin by Electronic Media Magazine.


In 1997, on a hiatus from Hercules, Kevin starred in the feature film Kull, the Conqueror, the prequel to Conan the Barbarian. That was followed by Walking Tall, the Payback and Walking Tall, Lone Justice, both released on Sony DVD. Other popular credits are Lifetime Channel's Last Chance Caf, SyFy Channel's Something Beneath, and Hallmark's third highest rated film, Avenging Angel. Between filming several other projects, in 2010, Kevin played "Pierluigi" in the Australian comedy The King of Mykonos, which debuted in Australia at number one. He has since played opposite Kristy Swanson and John Ratzenberger in the independent film What If..., which premiered in August of 2010. The film remained in theaters for five months on strong word of mouth and was nominated for Best Family Movie of the Year 2011 by the Movie Guide Awards. Kevin himself received the Movie Guide Award for Most Inspirational Performance of the Year for his portrayal of Ben Walker.


In 2011, Kevin starred alongside Dennis Quaid, Helen Hunt, and Carrie Underwood in Soul Surfer, the inspiring true story of teen surfer Bethany Hamilton who lost her left arm in a shark attack. Among features set to release in 2012 are the faith-based movie Abel's Field and the cable movie Christmas Angel that also stars Della Reese and Teri Polo. Upcoming projects releasing in 2013 include The Whole Banana, a comedy where Kevin will star alongside Kristy Swanson and Matthew Perry, Shadow on the Mesa, a western co-starring Greg Evigan and Gail O'Grady, and A Matter of Time, a faith-based movie.


Kevin has guest-starred on many TV shows, including Hawaii 5-0, Two and a Half Men, Gary Unmarried, According to Jim, Just Shoot Me, Hope & Faith, and USA Networks Psych, with recurring appearances on Dharma & Greg and The OC.


In real life, Kevin leads A World Fit for Kids, a mentoring program that trains inner-city teens to become positive role models to younger children. In 2008, the program was awarded the Governors Gold Star for the most successful after-school program in the state of California. In 2003, Kevin was named national spokesperson, successor to Arnold Schwarzenegger, for the Afterschool Alliancea non-profit organization working to ensure that all children have access to safe, enriching afterschool programs.