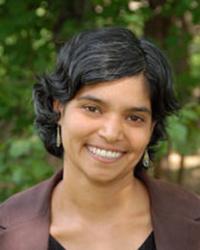 Keya Chatterjee has a unique spin on the 'big picture.' In her case, she's talking about satellite images of planet Earth. Before joining WWF, she worked for NASA and used the images to communicate research results on climate change. The detailed images of deforestation, sea ice loss and development gave her a unique perspective on the state of the planet. This visual representation of our human impact motivated Keya to shift her focus from plot-level projects to the planet as a whole.


Today, Keya is part of WWF's climate team, working on every level local to global to bring awareness about climate change to the masses and facilitate progress at the highest levels of government toward a new global climate treaty. She can talk in amazing detail about the climate change impacts we are already experiencing; the need to drastically reduce emissions worldwide; the links between climate change and poverty; and the barriers we need to overcome to reach a real global climate agreement.


When you look at the science on which the WWF climate program is based, it can appear daunting. The impacts are increasingly visible longer forest fire seasons in the US West, hurricanes that are more and more damaging, sea level rise, coral bleaching, and melting sea ice just to name a few. Yet Keya remains optimistic, Were in control of our fate here she likes to say, and WWF is on the front lines talking about the sustainable choices we can make as individuals, corporations and governments to reduce greenhouse gas emissions and prepare for what's to come.


Whether it's learning from people in lowland communities how to adapt to rising sea levels or being part of a delegation to multilateral climate discussions, Keya is looking at the big picture for people and conservation around the world.