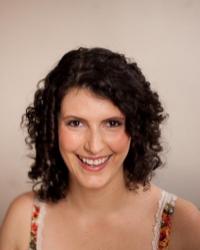 Kiara Duran is a singer-songwriter, storyteller, voice teacher, and energy healing practitioner in NYC. She is one of the founders of the musical theatre creation company Three Legged Chair, Inc. and has written music and lyrics for 9 original mini-musicals with contributions from children. Kiara has created, produced, and starred in Minestrone Con Arepas, a one-woman cabaret show about her Italian-American and Latino heritage. Over the last 5 years, she has studied, explored, and applied the combined modalities of The International Network for Energy Healing (INEH) energy work and her singing-by-feel-and-releasing-and-connecting-vibrations singing technique with swift, transformational results and is currently writing a book about the resonance and powerful relationship between them. Kiara has a brand new YouTube channel that features videos about these topics where she shares the wisdom she is gathering on her path, what she loves most, and her adventures with her little dog, Tucker. Her favorite songwriting awards include the Abe Olman Scholarship Award for Excellence in Songwriting from The National Academy of Popular Music Songwriters Hall of Fame and an AriZoni Theatre Award of Excellence for Original Musical Composition. Kiara’s self-titled EP of original songs is available for purchase on iTunes and for listening on Spotify. She has performed in various venues in NYC including The Laurie Beechman Theatre, The Bitter End, and Avery Fisher Hall.