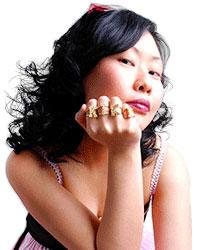 Born a sexy double Scorpio, Kiki T. began her astro adventures at the young age of 11, thanks to a preteen crush. In dire love with fellow Scorpio Simon Le Bon, the lead singer of Duran Duran, Kiki was convinced he was her soul mate. Astrology confirmed their compatibility, and Kiki was hooked.

Following those years, she learned the ins and outs of astrology, got over her Simon Le Bon obsession and mastered the finer points of this starry maze of manipulation. In college she learned how to do charts. When she graduated with a degree in creative writing at NYU, someone suggested she pitch an astrology column actually, it was an Aries who brought up the notion; Aries are the idea people, after all. Soon Kiki was producing columns for numerous publications and websites, tailoring them to suit each audience's needs - including teens, movie fans, the fashion trade, etc.

Finally, in 2002, Kiki landed her big break by way of a column in Playgirl. "Astral Vibrations" debuted in January 2003, and her career as the one and only Astrosexologist began. In 2004, Kiki became the astrologer for the women's magazine Jane. In 2005, her astral opus, "The Celestial Sexpot's Handbook," was sold to Warner Books, and in July 2006 Kiki went international by becoming the Astrosexologist for the UK sex magazine Scarlet. In January 2007, shortly after her book was released, Kiki became a monthly radio correspondent for the "Maria Sanchez Morning Show" in Santa Barbara, California.

In addition to her astrological career, Kiki also founded a teen website for girls in 1997 entitled Planetkiki.com, which won the SXSW Interactive Festival award for Best Girl Site. In the same year, Kiki edited a book from the site, "ANGST Teen Verses From the Edge." It won a Best Quick Pick Award from the National Library Association.

Currently, Kiki lives in NYC and enjoys a charmed life.